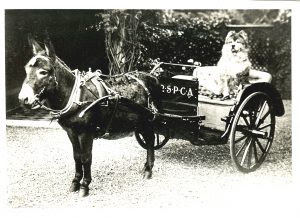 In June of 1916 the soldiers of the 1st Scottish (Cameronian) Rifles Regiment were pinned in a trench on the Somme river in France during one of the bloodiest battles of the Great War. A German shell fatally wounded a pregnant donkey and the soldiers quickly cut out and saved the baby that they named Jimmy.

Feeding him condensed milk and army rations Jimmy became a beloved member of the regiment even learning to salute by raising his hoof. Jimmy was a war hero, being wounded 3 times in battle and being promoted to the rank of Sergeant. He wore his stripes and chevrons on a browband.

After the war Jimmy was brought to Peterborough, where he became the mascot for the Royal Society for the Prevention of Cruelty to Animals (RSPCA) raising donations by giving children (and dogs) rides on his tiny cart. The Peterborough Advertiser newspaper even ran a weekly column detailing how many donations had been made thanks to Jimmy.

He died on May 10th, 1943, and was buried in Peterborough’s Central Park. A monument was erected to commemorate him.