December Spotlight: Fairies Are Real And Prefer The Mild Climate Of The English Countryside 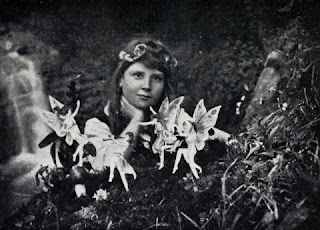 In 1920 the December edition of The Strand Magazine published photographic proof of the existence of fairies, living in Cottingley England,  accompanied by an article written by Arthur Conan Doyle (famed writer of the Sherlock Holmes series) called 'Fairies Photographed.' In the article Doyle writes that the photographs "remove the last faint shadow of doubt" of the existence of fairies.

The December edition of The Strand sold out in days and England became enamored due to the apparent validity of the photographs, having been examined by experts including scientists at the Kodak photographic company. All examinations concluded that the photographs and negatives had not been tampered with, although experts were careful to acknowledge that although the photographs "showed no signs of being faked", they "could not be taken as conclusive evidence that they were authentic photographs of fairies." Investigations by Arthur Conan Doyle as well as Edward Gardner of the Theosophical Society concluded there was no evidence proving That fairies didn't exist.

The strongest proof to the existence of these fairies was the fact that the photographs were not taken by professional photographers or Theosophical enthusiasts, but by 2 young girls, ages 9 and 16, too inexperienced in the photographic arts to pull off a skilled and sophisticated stunt.

In 1917 the 2 girls, cousins, Elsie Wright (16 at the time) and Frances Griffiths (9 at the time), played in the stream in the back yard of the Wright home and would tell the adults they were visiting the fairies who lived there. Annoyed by their mothers who did not believe them, the girls took Elsie's father's camera to the stream to prove they do indeed see fairies.

Much to the surprise of their mothers, a few moments later the girls returned with the camera claiming the glass plate negative would prove their claims. Elsie's father printed the photograph showing Francis sitting with 4 fairies but dismissed the photograph as somehow faked, yet couldn't figure out how. The girls, unhappy that he did not believe them, took the camera 2 months later returning with yet a second photograph, this time showing Elsie talking with a gnome.   To this evidence Elsie's father became fed up believing the girls must be tampering with his camera and refused to let them borrow it again.

Elsie's mother Polly however believed the photos to be real and in 1919 took them to the Theosophical Society in Bradford England during a lecture on "fairy life". Believing the photographs to be true Edward Gardner conducted an investigation of the area as well as of the Wright home. The girls were given 2 cameras that were secretly marked and instructed to walk out to the stream and photograph the fairies again in a controlled setting. The girls did as instructed and returned the cameras to Gardner which contained 3 photographs, in one Francis is talking to a fairy and another shows a fairy offering Elsie some flowers. The marked cameras showed no signs of tampering and Elsie's father had searched the girls room looking for cardboard cut-outs or art supplies that could prove the girls manufactured the photographs. But he found nothing so he allowed the photos to be published in The Strand in 1920.

The ensuing fervor began to annoy the girls. Gardner returned with a clairvoyant named Geoffrey Hodson, but in an effort to cull unwanted attention the girls claimed the fairies no longer visit.  Hodson however claimed during the visit he witnessed seeing fairies "everywhere". At this point the girls were "fed up with fairies" and called Hodson a "fake". Eventually the girls married and left England although the interest in the 'Cottingley Fairies' remained. Gardner published a book on the subject in 1945 titled 'Fairies: A Book of Real Fairies' and other articles, television programs, and films were also made on the 'Cottingley Fairies' up until the very end of the girls lives (Frances died in 1986, and Elsie in 1988). Shortly before her death Elsie admitted that four of the photographs were faked but the one was real and that she and Frances were too embarrassed to admit the truth after fooling Arthur Conan Doyle, the author of Sherlock Holmes.

Correspondence from Francis to a friend in South Africa (where she was originally from) emerged where Francis casually mentions run-ins with fairies. In one letter Francis writes "I am learning French, Geometry, Cookery and Algebra at school now. Dad came home from France the other week after being there ten months, and we all think the war will be over in a few days... I am sending two photos, both of me, one of me in a bathing costume in our back yard, while the other is me with some fairies. Elsie took that one." On the back of the photo she wrote "It is funny, I never used to see them in Africa. It must be too hot for them there."
In 1998 the photographs and other related materials sold at auction for £21,620 and is now on display at the National Media Museum in Bradford England.