February 18: The Resurrection of Ol' Rip 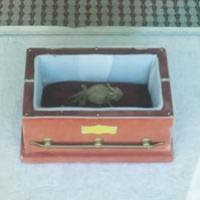 On February 18th, 1928, in in Eastland, Texas, the 31 year old County Courthouse was torn down. A time capsule placed in a cornerstone was opened and a horned lizard, placed there in 1897, among other memorabilia was produced alive; supposedly hibernating for over 3 decades in the stone.

Wether or not the lizard (named Ol' Rip) was in fact the original or ringer, it became a celebrity and went on tour, eventually meeting President Calvin Coolidge in Washington, D.C.

Ol' Rip died after almost a year, and the remains went on display in the new Eastland County Courthouse. Over 4 decades later, in 1973, Ol' Rip's body was stolen and an anonymous letter was found claiming that finding Ol' Rip alive in the cornerstone was a hoax. The author demanded, in exchange for returning the body, the  conspirators in come forth. No one did, and the coffin and body was found in the county fairgrounds.

Speculation that the body in the coffin was a substitute and rumors of the body of the real Ol' Rip was held by a private collector.

The average lifespan of a horned Lizard is about 5-8 years.
Posted by johnking at 12:00 AM