April 30: Voices From The Past Tell The Real History Of The Phonograph 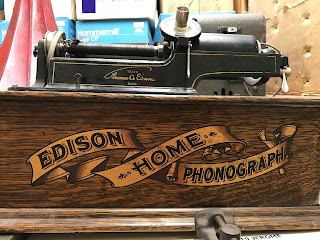 On April 30, 1877 French poet Charles Cros deposited a sealed envelope at the French Academy of Sciences (a standard procedure used by inventors to defend their work against any later dispute) containing a summary of his idea to record sounds and play it back.

The concept of recording sound was not new; In 1857 another  Frenchman  named Édouard-Léon Scott de Martinville designed a way to reproduce sound waves by way of a vibrating parchment diaphragm which allowed a bristle to trace lines on a sheet of paper wrapped around a rotating cylinder, which he aptly called a phonautograph. His goal was to visually study sound waves, audio playback, however, was apparently not considered.

20 years later Cros figured out how it could be done. But, as a poet, he did not have the means to build his machine, and apparently was happy enough to open it up to public domain.

On October 10, 1877, An account of his invention was published in the periodical La Semaine du Clergé.  Cros called his invention the paleophone, derived from the phrase "voix du passé" (voice of the past) But the author of the article instead called the device a phonographe.

On November 21, 1877, American inventor Thomas Edison announced his invention that he called the phonograph and gave a demonstration one week later.

On December 3, 1877,  the French Academy of Sciences opened and read Cos' letter gaining due scientific credit for conception of the phonograph.

By 1890 the phonograph would become a massive success on both side of the Atlantic, but Cros would not witness this, as he died in 1888 at the age of 45.