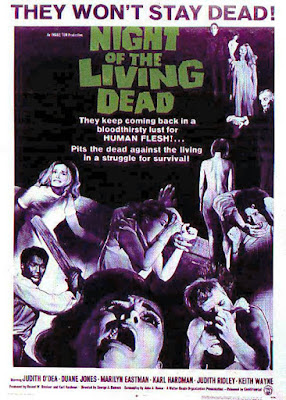 On October 1st, 1968, George A. Romero's Night Of The Living Dead hit the  silver screen. In terms of zombie culture George A. Romero (1940-2017) is the father of the modern Zombie; the zombie that comes to mind when we think of Flesh eating rotten corpses mindlessly roaming the streets to devour human victims.

Before 1968 when Romero's Night Of the Living Dead was released the idea of zombies were derived from Haitian folklore of people being dosed with a poison that renders them mindless and completely at the mercy of others, as depicted in the 1932 film 'White Zombie' staring Béla Lugosi.

The poison is made from a Datura flower that is quite beautiful, but strips it's victims of reality, those who survive have described the processes as horrifying.

Further reading on this can be found in the book The Serpent and the Rainbow, written by Harvard Scientist Wade Davis. But Romero's zombies had no puppet masters, just hordes of living dead that can only be killed by piercing the brain. A fun fact being that Romero didn't set out to make a new 'zombie' creature; in Night Of The Living Dead they are called 'Ghouls' and Romero mentioned later that zombies hadn't entered into the equation at the time, stating "I never thought of my guys as zombies when I made the first film...To me, zombies were still those boys in the Caribbean doing the wetwork for Lugosi." This may account for the running theme in his films to never use the "Z" word.

Romero would spend nearly half a century cultivating this species of zombie; especially memorable for the "Dead Series" beginning in 1968 with Night of the Living Dead and ending in 2009 with Survivial of the Dead. But Romero also ventured into other other types of zombies; most notably the 1973 film The Crazies. in this is a form of Zombie created by a biological agent that effects people and turns them into blood thirsty killers. The difference between this and Romero's 'traditional' zombie is that the infected still retain brain function, so they can think up the brutal ways to kill loved ones and neighbors while evading law enforcement and pretending to not be infected.

Romero's reanimated flesh eating corpse has truly become the archetype zombie, emulated shamelessly in popular culture from hit American television shows like The Walking Dead, blockbuster films such as Will Smith's I Am Legend, to annual 'zombie walks' carried out around the world, and has inspired zombie variations such as the 'fast zombie' made famous in the 2002 British film 28 Days Later and the 'brain eaters' from the Return of the Living Dead film series.

Aside from the prospect of thrilling entertainment, zombies have also been cultural vehicles that helped shape modern society. It is true that Romero's flesh eating zombie was the lasting influence of 1968's Night of the Living Dead; but at the time of its release it received recognition for something else entirely. Romero was praised for casting a black man (Duane Jones as Ben) in the role of the Hero, and the film is noted for being the first film with a black protagonist in a movie that was not about race relations. In 1999 the film was selected by the Library of Congress for preservation in the National Film Registry, and deemed "culturally, historically, or aesthetically significant".

But zombie culture has influenced society in other ways as well. Many milatary and government organizations have used zombie outbreak scenarios as a way to plan for large scale viral outbreaks and systemic losses of law and order. The United States Department of Defense Strategic Command has a contingency plan for a zombie outbreak called CONOP 888 also known as Counter-Zombie Dominance. The Center for Disease Control has also discovered that a great way to engage new audiences with preparedness messages is to disseminate health and safety information using zombie outbreaks as way to keep the message fun and entertaining.

For well over a century the Western world has been intrigued by zombies, first as it roots in African, Caribbean, and South American folklore, through the Imagination of science fiction writers like Mary Shelly and H.P. Lovecraft, to the many variations on the silver screen. Zombies have been depicted in countless ways, as slave victims and brutal assailants, to heroes and lovers. In Romero's 2005 Land of the Dead the protagonist, Big Daddy, is himself a zombie, who is desperately trying to save his fellow ghouls from being slaughtered. In the 1999 Japanese film Wild Zero we find a separated zombie couple desperately searching for one another.

In whatever form or media, it is a fair bet that zombies will continue to occupy a place in popular culture, in an ever expanding plethora of circumstances and viewpoints.
Posted by johnking at 12:00 AM