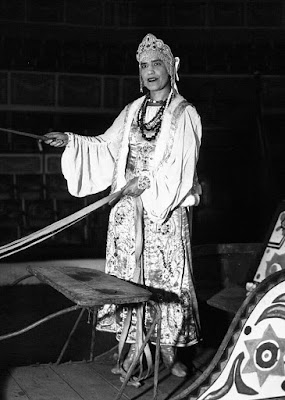 On September 27, 1977  in Los Angeles, California, Maria Rasputin (AKA Matryona Grigorievna Rasputina) died at the age of 79. She was the daughter of Russian mystic Grigori Rasputin who gained considerable influence with the Tsar Nicholas II, the last monarch of Russia, due to the belief that Grigori Rasputin could heal the Tsar's son,  Alexei, who was a hemophiliac.

Grigori Rasputin had survived a murder attempt in 1914 by a noseless woman named Chionya Guseva; but 2 years later he was assassinated by a group of noblemen who opposed his influence over the Tsar. Grigori Rasputin was poisoned, and when he would not die was shot three times, rolled up in a carpet and thrown off a bridge into the icy Malaya Nevka River.

Maria fled Russia and became a cabaret dancer. One of her dancing acts included actors impersonating her father being murdered. After that Maria became a lion tamer in the Busch Circus, under the title "the daughter of the famous mad monk whose feats in Russia astonished the world" but was mauled by a bear. She survived the bear attack and quit the circus working as a  riveter in Miami and Los Angeles before retiring in 1955.

Later in life she claimed to be psychic after Betty Ford had come to her in a dream. She is buried in Angelus-Rosedale Cemetery.
Posted by johnking at 4:07 AM