October 10: American War Hero Forced To Dress As A Woman Against His Will Is Rescued By Town 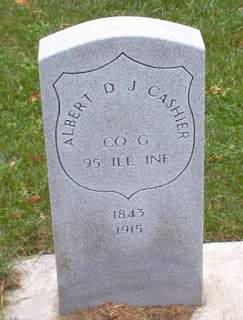 On October 10th, 1915, Civil War veteran Albert Cashier of the 95th Illinois Infantry died at the age of 72 and was laid to rest at Sunny Slope Cemetery in Saunemin, Illinois.

Although the shortest soldier in his regiment, Private Cashier was a capable fighter and admired by his peers, serving a full 3 year enlistment and fighting in over 40 battles. Cashier at one point became a prisoner of war but escaped by overpowering a prison guard. Surviving the war, Cashier settled in Saunemin, living a quiet life on his military pension supplemented by working as a handyman. At the age of 66, while working for Illinois State Senator I.M. Lish, Cashier suffered a broken leg while doing yard work (hit accidentally by a car Lish was driving) and was taken to the local hospital where it was discovered that Cashier was in fact a woman. Hospital employees did not divulge Cashier's secret and sent him to the Soldiers and Sailors Home in Quincy, Illinois to recover.
Cashier remained a resident of the Home until 1913, when he was sent to a state hospital for the insane due to the onset of dementia. Attendants there discovered Cashier was a woman and forced him to give his birth name and information (Jennie Hodgers born December 25, 1843 in Louth, Ireland) as well as forcing him to wear a dress,  which was upsetting and confusing to the aging Soldier who had lived as Cashier for 50 years. When word got out about the cruel treatment of the Civil War veteran many of his friends and former regiment soldiers protested his treatment at the state hospital, surprised but not deterred by his secret identity, and demanded the veteran be acknowledged and treated with respect.
When Cashier died on October 10th, 1915, he was buried in his Military uniform with his name and military rank on the tombstone.


Editor's Note: There are 400 documented cases of women assuming males identities in order to fight in the Civil War. Historians believe as many as 1,000 Women (or more) bravely fought on the front lines, many successfully keeping their male identities in tact after the war. Research looking into the hundreds of these soldiers shows different motivations for assuming male identities and joining the fight. Many were discovered after being killed in battle so little else is known about them.  Others wrote books and did interviews after the war  explaining motivations such as the patriotic call to duty; others joined so they could fight along side of their lovers, husbands, and brothers (two women were cousins and joined together) and resumed their previous identities after the war. One woman joined and fought along side her husband, and after the war they became marauders terrorizing small towns in the Appalachian region.
Others, like Cashier, identified as men and remained so for the rest of their lives (Cashier identified as a man long before he enlisted). The part of story I left out in the article is that more than 50 years after Cashier's death a second tombstone was added next to the first inscribed with his birth name (of Jennie Hodgers). Given that the town and his fellow soldiers fought to preserve his name and legacy, adding the second tombstone could be seen as disrespectful, but because I do not know what the motivation was for doing so I personally reserve judgement.