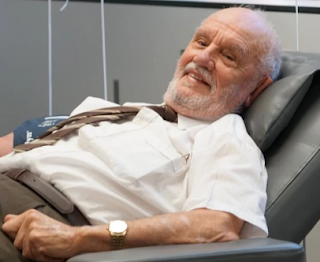 It would be his final donation after 60 years and 1, 173 donations.  Harrison began giving blood every few weeks at the age of 20 after a blood transfusion saved his own life. In the 1960s it was discovered that Mr. Harrison's blood contained a rare antibody called Anti-D necessary to make a medication to save new born babies with a hemolytic disease that is potentially fatal.

Medical officials at The Red Cross estimate that Harrison has helped save more than 2.4 million babies since 1967 but have decided that at 81, Mr. Harrison should stop giving to protect his own health, although Harrison said “I felt like I could keep going.”

Researchers immediately began working on synthesizing the antibodies in what they have named the “James in a Jar project.”
Posted by johnking at 12:00 AM