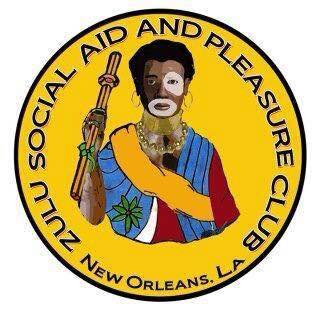 On September 28, 1916, the The Zulu Social Aid & Pleasure Club became an officially incorporated social club in New Orleans, Louisiana. The club puts on the Zulu parade each Mardi Gras Day and is New Orleans' largest African American carnival organization known for its blackface and grass skirt costumes, a crowned Zulu King, and for tossing hand-painted coconuts into the crowds (early blackface performances were not seen as racist and even respected black entertainers preformed blackface shows).

The Zulus got their start around 1908 when a social club called The Tramps were inspired by the costumes and pageantry of Vaudeville shows and reorganized it's marching troupe for Mardi Gras to include costumes, floats, and tossing coconuts to the crowd (as beaded necklaces where too costly for the working class club).After several years the Zulu Social Aid and Pleasure Club became incorporated in 1916 with a social mission and dedication to benevolence and goodwill.
Over the years changing social values threatened the club's popularity and future, especially during the 1960s when civil rights activists protested the club's parade on the grounds that 'Negroes wander through the city drinking to excess, dressed as uncivilized savages and throwing cocoanuts like monkeys.' did not represent black Americans and their fight for equality. There were also lawsuits from bystanders injured from tossed coconuts. By the end of the 1960s the membership dropped to 15, and the blackface and grass skirt costumes were dropped.
By the early 1970s an effort was made to save the club and its traditions. The club became integrated and actively recruited prominent members of New Orleans. The club reclaimed its traditions of the  traditional blackface and grass skirt costumes and in 1988 New Orleans passed the “Coconut Bill” removing liability from injuries resulting from thrown coconuts and enabling the tradition to resume.