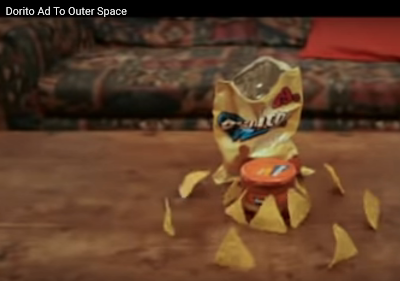 On June 12, 2008,  high-powered radars at the EISCAT European space station in the Arctic Circle  pulsed a message out over a six-hour period to the constellation Ursa Major, just about 80 light years away from Earth.

Although broadcasting messages into deep space is nothing new, we inadvertently broadcast television and radio signals into space daily; and in 1977 NASA sent two golden records into space with greetings and recorded messages from Earth, the broadcast on June 8th was something new; A recorded  advertisement for Doritos chips specifically for alien life.

The 30 second ad was created and directed by 25-year-old Matt Bowron of the United Kingdom, as part of the Doritos Broadcast Project, which invited the UK public to create a 30 second video involving Doritos and 'Life On Earth'.

Peter Charles, Head of the Doritos Broadcast Project said of the transmission "We are constantly looking to push the boundaries of advertising and this will go further than any brand has gone before... We also shouldn't be too surprised if the first aliens start arriving on planet Earth immediately demanding a bag of Doritos."
Posted by johnking at 12:00 AM