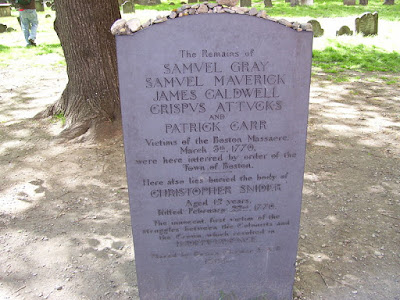 On March 5th, 1770, a man named Crispus Attucks was shot and killed by British soldiers in Boston Massachusetts, becoming the first person killed in the Boston massacre, as well as the first American casualty in the American Revolutionary War.

On the day of the Boston massacre, a boy was berated by British soldiers when he claimed that one soldier had not paid his barber bill. A group of colonists led by Attucks were outraged by the treatment of the boy and approached the Old State House armed with clubs and confronted the soldiers. Some threw snowballs at the soldiers, others threw debris. Some claimed Attucks struck a soldier with his club, others claimed Attucks had only been leaning against his club. Either way the soldiers opened fire and Attucks was shot twice in the chest becoming the first casualty of the American Revolution.

Along side his distinction as the first casualty of the Revolution,  he is also recognized as the first black, and first American Indian hero of the Revolution.
Verifiable evidence shows that Attucks was of both African and Wampanoag descent. Historians believe that his father was an African-born slave and his mother a Native American from the Natick tribe of the Wampanoag People. The two married and Attucks was born in Framingham, Massachusetts around 1723.

Attucks spent his life as a sailor, spending most of his time abroad, and only being in Boston in 1770 briefly, as he had just returned from a voyage to the Bahamas and planned on boarding a ship for North Carolina.

Of the eyewitness testimony about the Boston Massacre, none referred to Attucks as "black" or as "Negro"; as it appears that Bostonians viewed persons of mixed ethnicity as a class of their own. What is known is that Attucks was instantly recognized a hero; His body was carried to Faneuil Hall, where it lay in state until March 8, when he and the 4 other victims were buried together in the same grave site in Boston's Granary Burying Ground.

Of the British soldiers who carried out the massacre, John Adams successfully defended the accused against a charge of murder, Adams calling Attucks and the others "Irish teagues and outlandish Jack Tarrs" which was not necessarily a derogatory term for Irish immigrants (teagues) and sailors (Jack Tarrs) but was enough to save the soldiers necks from the noose.