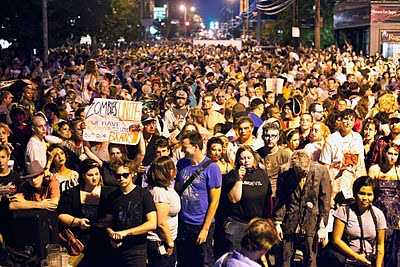 While Friday the 13th holds a dark aire of mystery, and is generally seen as unlucky, there is little evidence to prove it as such. Most scholars believe the 'Friday The13th' superstition is related to the Holy Bible, as 13 people (12 Apostles and Jesus), met on Thursday, the 13th day of the month for the Last Supper, and Jesus was crucified on Friday the 14th (Good Friday), thus blending the number 13 and the day of Friday.  But it is August 29th that has been the date of numerous eerie, nefarious, and tragic events.

In the United States, many ominous events occurred on this date, including Shays' Rebellion (1786), which was an armed uprising of Massachusetts farmers in response to high debt and tax burdens, and in 1758 the First American Indian Reservation is established. While, on this day in 1957, Congress passed the Civil Rights Act, it was also the date of the longest Filibuster in US history, by Strom Thurmond (against Civil Rights). Also in the U.S., in 1922, The first radio advertisement is broadcast on WEAF-AM in New York City beginning the long tradition of impatient listeners flipping through the radio dial in an effort to evade obnoxious ads.

On August 29th, in 2005, hurricane Katrina hit the U.S. Gulf Coast, in which at least 1,245 people died and over a billion dollars in damage was created. Also in the United States, it was the date of a record number of arrests during a US political convention (Republican National Convention in New York City with over 1800 arrests) in 2004.

But it is quite possible that August 29th holds the most bitter association in Russia, as it was the date of not only their first Atom Bomb test (in 1949), but also the day of their first hydrogen bomb test (in 1953). It also happens to be the day in1991 that the Communist Party in the Soviet Union collapsed.

Some positive events also occurred on August 29th including the abolishment of slavery in the United Kingdom (1833), the motorcycle was invented on this day in 1885, the first 3-way call took place in 1877 (although for countless teenage girls this began a cruel tradition of entrapment), in 1885 the world's first Heavy Weight Boxing match took place (again, the positive or negative nature of this is debatable), Chop Suey was invented in NYC in 1896, and in1883 The world's first electric stove cooked dinner was made (also debatable). In science fiction, August 29th, 1997,  is the day the machines destroy the Earth in the Terminator film franchise.

As for births of curious and bizarre individuals on August 29th, Diamanda Galás,  the American avant-garde soprano and  pianist was born on this day in 1955, whose music has been described as "the most unnerving vocal terror." Anton Newcombe, founder of the band The Brian Jonestown Massacre, and whose abusive and hostile stage presence have become as well known as his music, was born on this day in in 1967. It could also be noted that his father committed suicide on August 29th in 2005, a year after the documentary film 'Dig!' was released showing a behind the scenes look into into Anton's tortured and drug addicted world. In a 2014 interview with The Guardian,  Anton's response to his father's suicide was "fuck him."
GG Allin, born Jesus Christ Allin, whose stage antics of defecting on himself as well has eating and slinging it onto audience members,  was born on this day in 1956.

Editor's Note: The editor of this publication was present at the 2004 RNC protest in NYC, and August 29th is also his birthday.
Posted by johnking at 12:00 AM