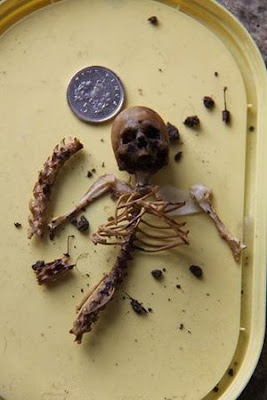 On April 1st, 2007, 31 year old Dan Baines was walking his dog in Derbyshire, England, when he and his dog came across the remains of an animal with human features. The dog had uncovered the remains and swallowed the legs and pelvis before Baines could retrieve the body from the dog's mouth. The entire corpse fit into Baines' hand (with the skull being about the size of a quarter) but had the features that resembled that of a human adult.

90 years prior, 2 girls in England claimed to have seen and photographed fairies in Cottingley, only about 75 miles north of Derbyshire, causing many to believe Baines' dog had discovered (and partially eaten) the skeleton of a fairy. X-rays showed the bones of the skeleton to be hollow much like the bones of a bird.

Baines sold the remains for £300 to the National Museum in Bradford England where it is now on display. 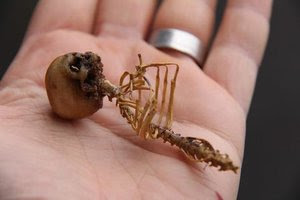 Editor's Note: Dan Baines is an illusion designer for magicians from London, England, and first posted images on his website showing the remains of a dead fairy on April 1st, 2007. He now hosts workshops teaching the techniques he used to create his models of dead fairies.