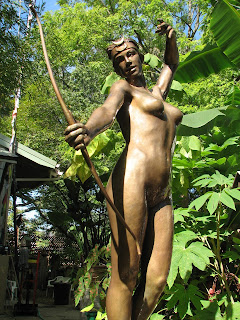 On August 28th, 2013, in Juárez, Mexico, a woman calling herself "Diana" shot and killed a bus driver, and repeating this act by killing a second driver the following day on August 29th.
These killings were made in response to a growing epidemic of women being raped and killed in Juárez after boarding city buses alone. In 2010 over 300 women in Juarez were found raped and murdered; many of the attacks are assumed to be carried out by bus drivers preying on women who ride alone at night coming home from work.

The woman, still only known as Diana, with dyed blonde hair (or wearing a blonde wig), boarded the buses in August of 2013 and shot the drivers point blank. After the second shooting, several media outlets in Juárez reported receiving an e-mail from a sender claiming to be the killer. In the e-mail, she calls herself "Diana, the hunter of drivers."

The name Diana was borrowed from the Roman Goddess Diana The Huntress, virgin goddess of the hunt and of women. Juárez' Diana, protector of women, said in her email "I am an instrument that will take revenge for many women. For we are seen as weak, but in reality we are not. We are brave. And if we don't get respect, we will earn that respect with our own hands. We the women of Juárez are strong."

Diana, the Hunter of Bus Drivers has not reemerged since the second shooting death in 2013, but as the epidemic continues (over 2,500 murders of women annually in Mexico)  her name has not been forgotten.

Image: Sculpture of Diana The Huntress by Raymond Graf (2014)
Posted by johnking at 12:00 AM