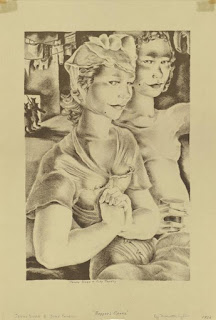 On March 18th, 1741, an Irish woman known as Jenny Diver was hanged in England. Born Mary Young, Diver migrated to England where she became a skilled thief, robbing high society using many techniques including false arms which made it possible for her rob people with her hands seemingly visible in her lap.

As a member of a street gang run by a woman named Anne Murphy, Diver was so skilled as a thief that she became the leader of Murphy's gang and given the name Jenny Diver.

In 1728 Diver was the inspiration for the role of the same name in John Gay's 1728 The Beggar's Opera.

Due to her notoriety she was taken to her execution in a mourning carriage in a black dress and hat with veil, and reportedly behaved with composure to the very end.