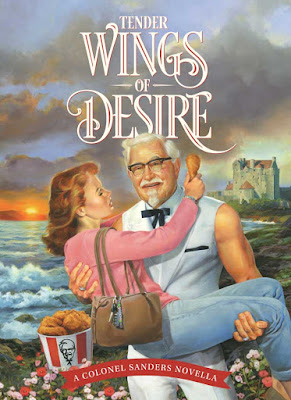 The fast food giant, KFC (Kentucky Fried Chicken), headquartered in Louisville Kentucky, reports that Mother's Day is the busiest day of the year, with sales jumping 40% on average.

In 2016 the company served approximately 370,000 families on Mother's Day, selling about 6.5 million pieces of chicken (about 1.5 million pounds), 815,000 servings of mashed potatoes and gravy, and 470,000 servings of cole slaw.
This may account for KFC's release of a free romance novel, called 'Tender Wings of Desire' just before Mother's Day 2017, with founder Harland Sanders as the love interest.

"The only thing better than being swept away by the deliciousness of our Extra Crispy Chicken is being swept away by Harland Sanders himself," KFC's U.S. director of advertising George Felix said in a press release,  "So this Mother's Day, the bucket of chicken I get for my wife will come with a side of steamy romance novella." Patrons to KFC restaurants in New Zealand can pick up chicken flavored chocolates on Mother's Day as well.

KFC is no stranger to absurd marketing stunts;  in December of 2016 KFC sent 125 copies of a free limited pressing 12" record to U.S. record stores to hide for a scavenger hunt in a Guerrilla-Marketing stunt before rolling out their 'Nashville Hot Chicken' line. The album featured Fred Armisen as Harland Sanders singing about how wearing the same suit everyday drove him insane.