May 13: A Horse Is A Horse, Unless She Is Your Superior officer 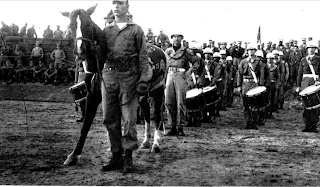 On May 13th, 1968, a 20 year Marine old staff sergeant, Sergeant Reckless, died after getting tangled in some barbed wire at Camp Pendleton. This staff sergeant was a celebrated war hero that received many accommodations including two Purple Hearts, a Marine Corps Good Conduct Medal, a Presidential Unit Citation, and bronze star for her service during the Korean War.

She was only 5 years old when she was wounded twice, during the Battle of Vegas in 1953, for which she was awarded 2 purple hearts and was given the battlefield rank of corporal. Shortly after the war she was promoted to sergeant. Not only was she respected amongst her unit for her fearless bravery, she was also known for her good humored shenanigans around camp. Often sharing beers with her fellow troops she was known for her ferocious appetite, her favorite being coca cola,  she was liable to eat just about anything including a horse blanket and $30 in poker chips.  She was not the first female officer in the marines, but gained world wide recognition for her bravery during wartime service, and is noted as the first horse to participate in an amphibious landing.

On November 10 (the birthday of the Marine Corps), 1954, Sergeant Reckless entered the U.S. at a port in San Francisco, but the Department of Agriculture insisted she be tested for STDs before entering, to the outrage of the Marines who served with her, knowing her as an upstanding officer.

Reckless retired from active service with full military honors at Camp Pendleton on November 10, 1960, and lived there until her death in 1968. She had four foals, including Fearless, Dauntless, and Chesty.
Posted by johnking at 12:00 AM