August 15: When Listening For Aliens, It Helps To Have A Big Ear 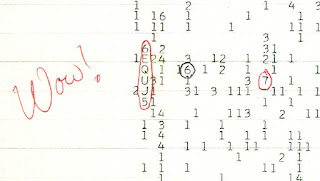 On August 15th, 1977, a strong narrowband radio signal from space was recorded at the Ohio State University's Big Ear radio telescope, in the United States. A few days later astronomer Jerry R. Ehman, assigned to a SETI (Search for Extra-Terrestrial Intelligence) project, discovered the anomaly while reviewing a computer printout and was so impressed that he circled the reading on the printout and wrote the comment Wow! on the side.

What made the anomaly interesting to Ehman is that it appeared to be an artificial radio signal, not a natural signal that would be found in space, such as one emitted from a pulsar or quasar.
Also, The Big Ear telescope used a 50 channel radio receiver. A natural signal would have bled into several channels, but the 'Wow!' signal was only heard on one frequency, with no other noise on any of the other channels; this signal was narrow and focused, as would be expected from an artificial source.

This signal had all the ear marks of an artificial signal sent from another civilization but has not been detected since, despite several attempts by Ehman and others.  The possibility of the signal coming from a natural origin has not been completely discounted, but to date the Wow! signal is considered the best candidate for an alien radio transmission ever received.
Posted by johnking at 12:00 AM