June 30th: When you can't blame aliens or asteroids... 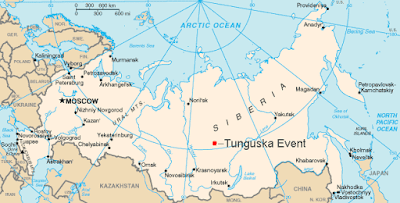 On June  30th, 1908, at 7:17 a.m.  80 million trees were instantly knocked over near the Podkamennaya Tunguska  River in central Siberia, in what is now known as the Tunguska Event.

Siberian natives and Russian settlers observed a column of bluish light, nearly as bright as the Sun, moving across the sky. Within minutes witnesses heard a sound that seemed similar to artillery fire move from the east to the north. The sound was accompanied by a shock wave that knocked people off their feet and broke windows hundreds of kilometers away. Amazingly no casualties were reported.

It is estimated that the Tunguska explosion knocked down 80 million trees over an area of 2,150 square kilometers, and that the shock wave from the blast would have measured 5.0 on the Richter magnitude scale. Some scientists believe this resulted from the air burst of a meteor or a comet even though no crater has ever been found.

Others believe that the Tunguska Event was caused by Nikola Tesla, who had been working on his 'World Wireless' system, a system that would use the atmosphere as electrical conductors allowing for the transmission of electric energy without wires on a global scale. In the few years leading up to the Tunguska Event Tesla built an 187 foot tall power transmitting tower station in in Shoreham, New York, that he believed could wirelessly send power across the Atlantic into Europe. The project was never completed.