September 6: Piggly Wiggly And The First Final Frontier Of Canada 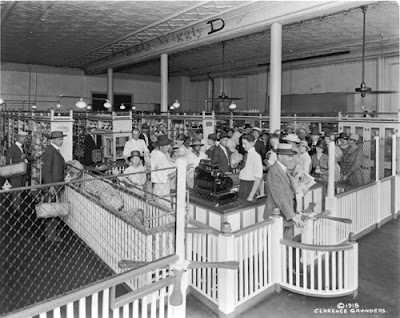 On September 6  in 1916 the first self-service grocery store, Piggly Wiggly, opened its doors. Founded by by Clarence Saunders at 79 Jefferson Avenue in Memphis, Tennessee, it was the first grocery that allowed customers to browse the isles and pick from a selection of items creating the modern style of consumer demand. The first Piggly Wiggly had a little over 200 items to choose from. The modern Grocery store has an average of more than 35,000 items (with the average consumer buying more than 250 individual band items per year).
Mr. Saunders never explained how he came up with the Piggly Wiggly name. His second grocery store was called  Keydoozle, and was a fully automated store that acted like a giant vending machine. Saunders opened 3 Keydoozle stores, each time having to close for failure to keep up with high consumer traffic of his extremely popular concept.
'Automated Retailing' and Automats (automated restaurants) can still be found around the globe especially in Japan, where 'Conveyer Belt Sushi' restaurants are common.

On this day in 1966 the very first episode of Star Trek was aired on Canada's CTV network (a full two days earlier than in the U.S.) beginning with the now famous phrase "Space; the final frontier. These are the voyages of the starship Enterprise."