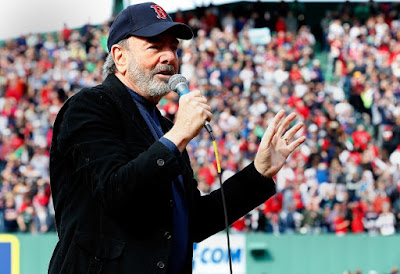 On April 20th, 2013, singer Neil Diamond surprised the crowd at a Red Sox game at Fenway Park in Boston when he walked out to the field during the 8th inning and sang his platinum single Sweet Caroline.

The song has special meaning for the Red Sox, as it is played in the middle of the 8th inning at all Boston Red Sox home games, and has since 2002.

Originally played at a Sox game in 1997 for no reason besides that a Fenway employee in charge of music, Amy Toby, liked the tune, it became a good luck charm for the team and played during the 8th inning at any game that the Sox were in the lead.

In 2002 Charles Steinberg, then the executive vice president of public affairs, made the call to play the song at every game.

5 days after the Boston Marathon bombing that killed 3 and injured 264 others on April 15th, 2013, Diamond surprised the Red Sox by singing the song live at the game, and donating all future royalties from sales of the song to the One Fund Boston charity to help the people most affected by the bombings, causing sales to skyrocket 600%.
Posted by johnking at 12:00 AM