May 12: When The Disease Is Love, Why Take the Cure? 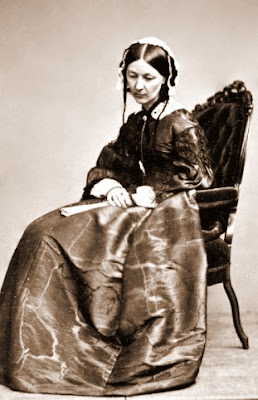 On May 12, 1821, Florence Nightingale was born into a rich upper-class British family in Florence, Italy, the city in which she was named after. Just about every privilege afforded a woman of that time  was at her disposal, and yet she dedicated her life to care taking of the sick and educating nurses.

At 16 Nightingale had several experiences that she was sure were calls from God prompting her to devote her life to the service of others. Nightingale wrote of one such encounter "God called me in the morning and asked me would I do good for him alone without reputation."  As a prodigious writer, much of her studies and accounts in nursing were recorded, as well has her studies of Mysticism. Much of her published work is on Nursing education and statistical studies, in which she was a pioneer, but her work on mysticism was also published (albeit after her death).

Her work in the Crimean war was well recorded by the media at the time and her fame helped open  the Nightingale Training School at St. Thomas' Hospital on 9 July 1860 (Now called the Florence Nightingale School of Nursing and Midwifery, the school is part of King's College London). The first trained Nightingale nurses began work on 16 May 1865 at the Liverpool Workhouse Infirmary.

Nightingale died on August 13th, 1910, at the age of 90, leaving behind a large body of work on Nursing education. Although she never married, her memory lives on as the name for a syndrome when a caretaker falls in love with a patient (or visa versa). There is no evidence that Nightingale ever suffered from this syndrome, but more than a half century after her death the term Florence Nightingale Syndrome entered the western pop culture lexicon, having been mentioned by actor Albert Finney in a 1982 interview in People Magazine.

The term 'Florence Nightingale Effect' was used correctly by the character Doc Brown in the 1985 blockbuster hit Back To The Future, stating "It happens in hospitals when nurses fall in love with their patients." while explaining explaining to Marty why his mother fell in love with him when she took care of him after he traveled back in time to 1955 and was hit by a car driven by his grandfather.