On April 1st, 1778, General George Washington lead his troops into victorious battle in Valley Forge, PA, against the British in the Revolutionary War. This was a major turning point for the Continental Army, whom, until this point were feared to loose due to the dismal living conditions Washington's troops had been subjected to.

Over a six month period, the deaths in the Valley Forge camp numbered in the thousands, the majority being from disease, compounded by lack of food and proper clothing, poor shelter, and the extreme cold. By contrast, the British were comfortably quartered in Philadelphia and paid for their supplies in sterling. Washington, on the other hand, had difficulty procuring supplies from the few farmers in the area who would not accept rapidly depreciating American paper currency. As conditions worsened, Washington was faced with the task of maintaining morale and discouraging desertion, which had become common by February.

Washington had repeatedly petitioned the Continental Congress for badly needed provisions but with no success. He expressed the urgency of the situation, exclaiming, "Something must be done. Important alterations must be made!"

Finally, on January 24, 1778, remembering an old family recipe of dehydrating brewed coffee for easy transport, Washington began making instant coffee at the camp for the troops to carry in their snuff tins on the front lines, in which they mixed with water or snorted with tobacco snuff.

By late March a revitalized army emerged from Valley Forge in good order, thanks in part by General Washington's instant coffee, ready to take on the red coats. The British evacuated Philadelphia for New York on April 1st, 1778.

After the War Washington marketed and sold his instant coffee as Washington's Prepared Coffee; by the time of his death on March 4th, 1799, he was the richest man in the United States. 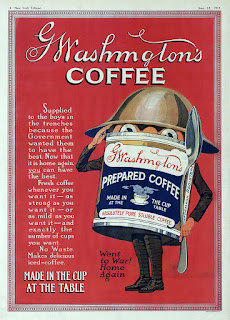