March 9: A Grandmother Predicts The Future And A Nursing Home Rock Band Is Declared 'Better Than The Beatles' 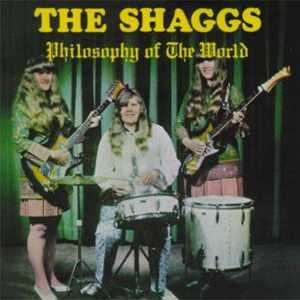 On March 9th, 1969, The Shaggs, an all girl rock group of sisters Helen, Betty, and Dot Wiggin, recorded the album Philosophy Of The World at the insistence of their father Austin Wiggin. The significance of this recording would not become apparent for many years as The Shaggs spent their entire musical career (1968-1973) playing in either the Town Hall or the local nursing home in their home town of Fremont, New Hampshire. The three sisters never even considered playing music, but their father Austin took them out of school and spent his life savings so they could learn how to play music and be in a band, convinced their stardom was fate assured.

As it happened, Austin's mother (the three sisters grandmother) had predicted (when he was still a child) 3 events in his future: That he would marry a strawberry blonde girl, that she (the Grandmother) would die before his strawberry blonde wife would give birth to 2 sons, and that his daughters would be in a popular rock group.  Austin married a strawberry blonde girl, his mother died and his wife gave birth to two sons, making all her other predictions correct, so Austin pulled his girls out of school and spent his savings believing the last prediction would come true as well.

The girls had no inclination to learn to play music before, much less be in a rock group, but Austin wouldn't take no for an answer, having them practice for hours at a time. After the girls wrote several songs Austin drove them to Massachusetts and paid for a studio to record them "while they were still hot." He then paid a local record label, Third World records, to print up 1,000 copies, which they did. In a bizarre twist, the owner of the label stole 900 of the 1,000 copies and vanished. With only 10% of the records ordered to work with Austin shipped the rest to local radio stations, which were almost completely ignored as the girls music was barely structured and didn't resemble standard pop music (some might say any music) at all, and sounded to most as "nonsensical" gibberish.

After playing for a few more years, at the nursing home and Town Hall, The Shaggs disbanded when Austin, the driving force behind the band, died.

A decade after the release of their album famed musician Frank Zappa was a guest on the popular Dr. Demento radio show in Los Angeles and played some tracks from one of the 100 known copies of Philosophy Of The World, and declared The Shaggs "Better than the Beatles" and by doing so bringing the third prediction to fruition.
In 1980 Philosophy Of The World  was reissued by Rounder Records. In 1983 a previously unreleased 2nd album, titled The Shaggs' Own Thing, was also released and Rolling Stone magazine declared The Shaggs the "Comeback of the Year." Since then The Shaggs have been the lauded by many famed musicians and the focus of documentaries and tribute albums. Nirvana frontman Kurt Cobain ranked "Philosophy of the World" as No. 5 on his 50 best albums list.
Austin Wiggin did not live to see his mother's final prediction come true.